How to Watch Israeli Premier League 2022-23 Match. The 2022–23 Israeli Premier League, also known as Ligat ONE ZERO for sponsorship reasons, will be the 24th season since its introduction in 1999 and the 81st season of top-tier football in Israel. A total of fourteen teams will compete in the league, including twelve sides from the 2021–22 season and two promoted teams from the 2021–22 Liga Leumit.

Maccabi Bnei Reineh and Sektzia Ness Ziona were promoted from the 2021–22 Liga Leumit. Maccabi Bnei Reineh was promoted for the first time in his history, Sektzia Ness Ziona returned after two seasons in the second league. Hapoel Nof HaGalil and Maccabi Petah Tikva were relegated to the 2022–23 Liga Leumit after finishing the 2021–22 Israeli Premier League in the bottom two places. 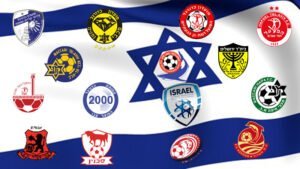 The Israeli Premier League, also known as Ligat Ha’Al or Tel Aviv Stock Exchange League for sponsorship reasons, is the top-tier football category in Israel. Each year, fourteen teams fight for the title.

As is the case with most leagues around the world, the Israeli Premier League works under a promotion-relegation system. Two clubs are relegated to the Liga Leumit by the end of the season, with two teams from that league taking their place in the Israeli top-flight.

The Israeli Premier League hands four spots to play European competitions in the subsequent season. The winner of the tournament enters the preliminary rounds of the UEFA Champions League, while the runners-up and the third-placed side enter the preliminary stages of the UEFA Europa League. An additional spot is awarded to the Israeli cup champions.

Did you know? Maccabi Tel Aviv, Maccabi Haifa, Hapoel Tel Aviv, Beitar Jerusalem and Hapoel Be’er Sheva are the most dominating teams in the Ligat Ha’Al.