Serie A on TV channel how to watch The Italian Serie A is live on BT Sport with the Coppa Italia being shown on Viaplay Sports for the 2022/23 season.

The Serie A, also called Serie A TIM for national sponsorship with TIM, is a professional league competition for football clubs located at the top of the Italian football league system and the winner is awarded the Scudetto and the Coppa Campioni d’Italia.

About Italian Serie A 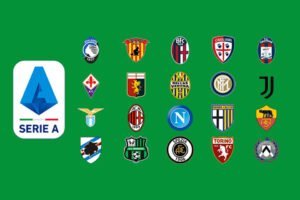 This is a list of television broadcasters from around the world which provide coverage of the Serie A, Italian football’s top-level club competition.

Which teams were promoted for the 2022/23 Serie A season?

Which teams were relegated after the end of the 2021/22 Serie A season?

Cagliari, Genoa, and Venezia failed to maintain their top flight status and were relegated to Serie B at the end of the 2021/22 Serie A campaign.

Which Serie A teams will be involved in European competitions during the 2022/23 season?

A total of seven Serie A teams will be featuring in European competitions during the 2022/23 season. Milan, Inter, Napoli, and Juventus will all be taking part in the UEFA Champions League, while Roma and Lazio will try their luck in the UEFA Europa League. Finally, Fiorentina will have a chance to potentially progress in European club football’s tertiary competition if they can successfully navigate their way through the UEFA Europa Conference League play-off round.

When will the Serie A season stop to give way for the 2022 FIFA World Cup?

The 2022/23 Serie A campaign will be available to watch in the following countries:

Where can I stream live Serie A games online?

The 2022/23 Serie A season will be available to stream live or on-demand in the following countries: