Primeira Liga How to watch the 2022/23 Season Online

Portuguese Primeira Liga TV schedule for fans in the United States, you’ve come to the right place. The likes of Porto, Sporting and Benfica always make noise in Europe, showing the prominence of this league.

GolTV airs three to five Primeira Liga games each week, live from Portugal. Many of the games feature the traditional heavyweights of Portuguese soccer including FC Porto, Benfica, Sporting CP, as well as Sporting Braga. All had strong seasons either domestically or in European play in 2021/22.

We’ll be sure to keep you updated throughout the season with all of the TV times and streaming info of where you can watch Benfica, Sporting, Porto and other great Portuguese teams as well as games from Taca de Portugal. 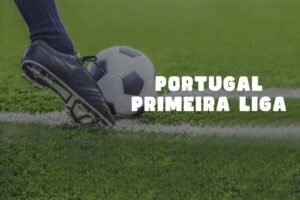 Which teams were promoted for the Primeira Liga season?

Rio Ave finished last season as the winner of Liga 2 and was automatically promoted to the Primeira Liga alongside Casa Pia. GD Chaves secured their place in the top-flight via a 2-1 aggregate win in a promotion playoff win against Moreirense.

Which teams were relegated after the end of the 2021-22 Primeira Liga season?

B-SAD, formerly known as Belenenses SAD, were the first to be relegated from the Primeira Liga, finishing the season with just 26 points after 34 matchdays. They were followed by Tondela who narrowly missed out on a play-off spot after drawing in their final game of the season.

Moreirense occupied 16th on the chart but was condemned to Liga 2 after being defeated in the playoffs by Chaves.

Which Primeira Liga teams will be involved in European competitions during the 2022-23 season? ​​

FC Porto and Sporting CP will be featuring in the UEFA Champions League after finishing in first and second place respectively. Benfica could join the pair as the third qualifying team for th continental club competitions should they sail through the playoffs.

When will this Primeira Liga season stop to give way to the 2022 FIFA World Cup?

The 2022-23 Primeira Liga season will be brought to a halt on November 13, 2022 to allow the international plaers be ready for the FIFA World Cup set to be played in Qatar later this year.

When will the 2022-23 Primeira Liga season resume after the FIFA World Cup?

When is the 2022-23 Primeira Liga season scheduled to end?

Where can I watch 2022-23 Primeira Liga season games live on TV?

The 2022-23 Primeira Liga will be available to watch in the following countries: